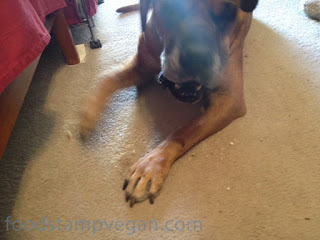 I love my dog.

Everyone knows that. But, he isn't vegan. He eats more non animal products than I know your average dog eats, but he does eat salmon based foods about 90% of the time. I mix his foods with beans and chickpeas and veggies, and no beef or chicken. So I guess you could say my dog is pescetarian.

He is also a power chewer, and in the past I've tried everything I could to satiate his chewing. The Himalayan dog chew (milk based), deer antler (salvaged alter), kongs, bully sticks which were like crackers to him various puzzles and the like. None of them worked and a lot of them were insanely messy. It can be a nightmare when you have a power chewer.

The only thing that keeps him going is pressed rawhide which is the inner skin of cow. I don't like that this seems to be his only avenue,, and even though it is, I continue to look for alternatives.

When V-dog announced their vegan dog chew, I was over the moon. I waited a few months until I could find it readily available, and I ordered one from the UK. 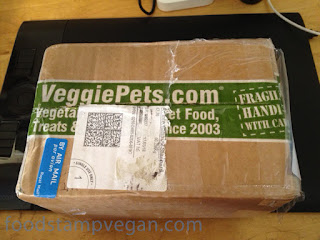 I got the largest one they sold and total it was about $10 US, that's the price of a moderately priced rawhide bone, so that was good to me. 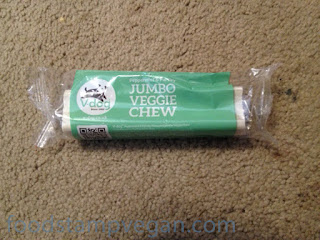 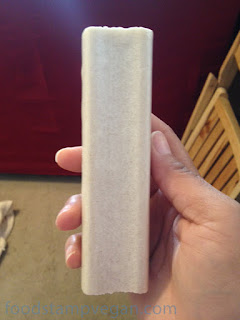 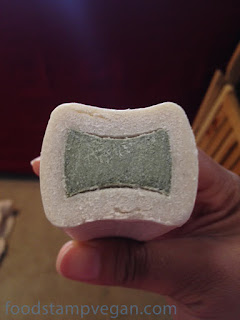 It smelled great and seemed dense. Its made of mint and rice and when I realized that I thought, great, this is gonna last all of 2 minutes. 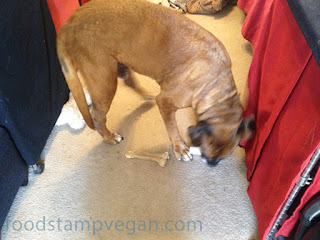 I gave it to Brian, my 100 pound bullmastiff, and at first he didn't know what to make of it. Then he LOVED it, like carried it around the yard in delight loved it. 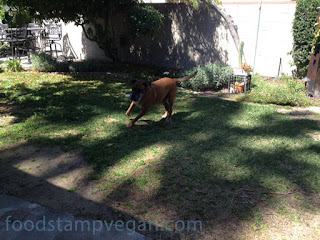 That thrilled me! Next was his test, how ling would it last. Let's say it had a good 10 minute run. When it got soft, it was over. The rice casing just softened too much and he inhaled it. 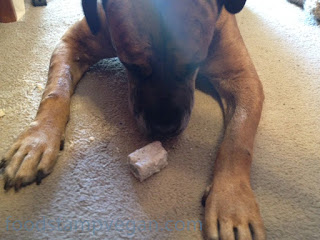 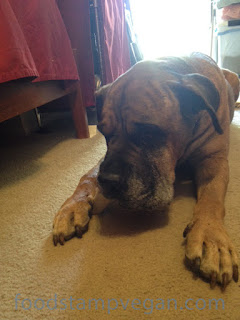 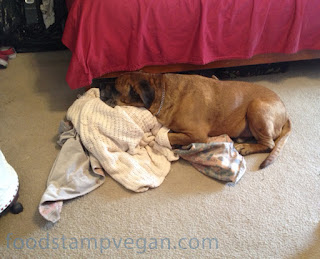 Another failure, partly. He did love the flavor, it's ethical, it just didn't last long, and I think that's the downfall for power chewers, especially the small demo of vegan alternatives for them.

In the end, I'd get 20 if they lasted even a couple hours, but at $10 each, to last 10 minutes is just too much. If you have a moderate chewer dog, those are fantastic and I believe they could last quite a while.

Perhaps I'll get more for an occasional treat for him, but this dog needs to chew and I reluctantly have to go back to the pressed rawhide.


But I will stay on the lookout for more vegan dog products.
Posted by Food Stamp Vegan at 6:21 AM