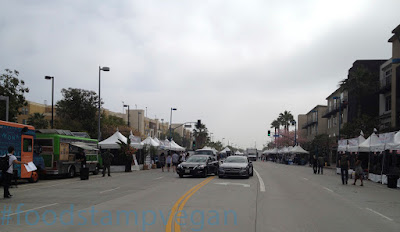 I got there at about 10:15AM, because once again, the ticket system for the festival was in place. 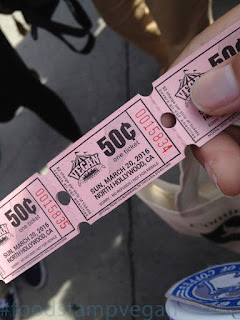 For those of you that do not know what I mean, tickets are purchased by the attendees and then given to the booths as a form of payment for the foods. This sometimes keeps the events free from admission charges, but there is often a surcharge attached to the tickets purchased. In the case of this event, there was a $2 charge per $12 worth of tickets purchased. Many people who had never went barked at that system. I did too, but not for that reason and I will get back to that later. 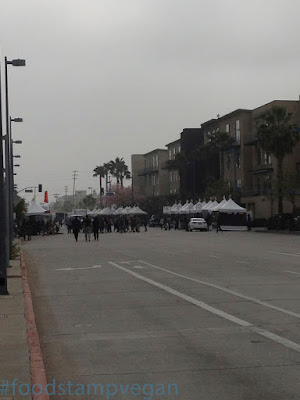 Arriving early, I came to see that they had blocked off a huge chunk of a major corridor in NOHO. It was adjacent to the Metro Rail and some bus lines so it must not have been a cheap street to block. I am actually appreciative of them for keeping the event so close to the rail and in the same area as their first one.

As I waited with the others the lines grew longer and longer. The lines for getting tickets had not been blocked off yet so people were sort of making their own lines based on the teller windows of the tent. At around 10:35 someone came and filtered people to the side of the street in essence messing up whatever line system the crowd had made. It was nearing 500 people now, so I decided to do a walk through of the event and see if there was another ticket booth at the other end of the street. 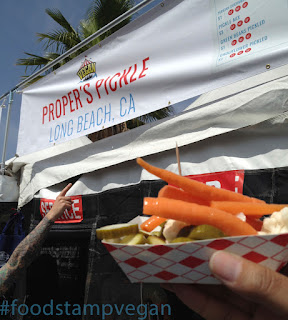 Pickles! They did a pickle on a stick for $1 it was very popular.

I like to do a walk through of events so I can plan my line of attack. I looked around at the booths and was pleased to see the signage of all the booths so uniform and clearly marked with their offerings and prices. The event was going to start in 15 or so minutes and many booths were still setting up. Actually many booths were not even ready by 11:45. If I had purchased a VIP ticket, that would have pissed me off. Booths should be ready at the start of the event, and the coordinators need to make sure that is the case as much as they can. 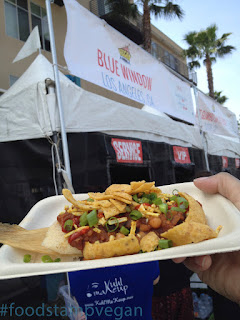 $3 for a very filling tamale.

At the other end of the street there was indeed another ticket line and it only had about 50 people so far, so I texted my friend to come down and wait in this line. She did. Once 11:00 came around, there was a concierge and they instructed us to an available window. That was GREAT, as the line of ticket buyers soon stretched around the block. My friend and I split a block of tickets. 96 tickets for $45 so about $22 each. We then did another walk through and soon began to enjoy the yummies of the fair. 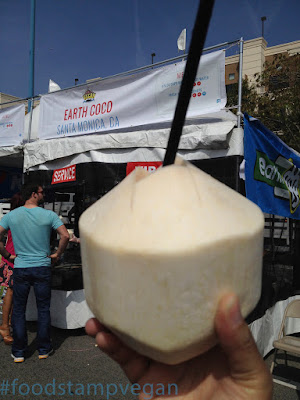 Very refreshing and they would cut open the coconut and shave off the meat when you came back with it empty. It was cool watching them make the almond milk ice cream right there! 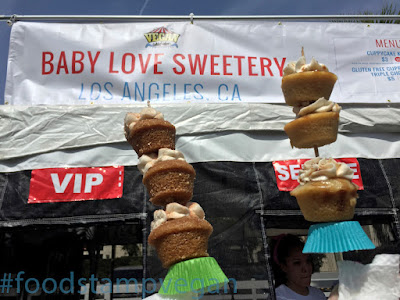 The cupcake Kabobs were the best deal. $3 each! 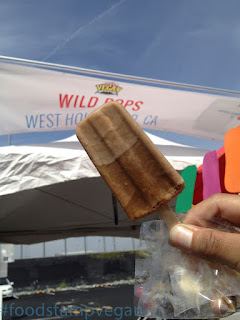 Fantastic popsicle that was so refreshing as the day warmed up.

Each ticket was 50¢ and most of the food items started at $3, which was 6 tickets. One of my largest complaints of their first fair was that the fair didn't notify the customers roughly the percentage of tickets to what was available and when you got there, you saw everything was about half a sheet of tickets (about $4) for sample size items. That made a lot of people mad so labeling what was available and how much it cost in such a uniform way on the signage was great. They also listed the location of the vendors so you could try yummy things that were not from your area, which was my goal. 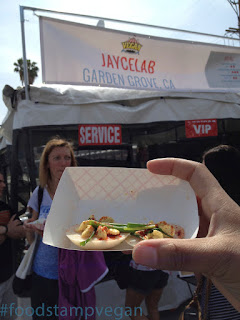 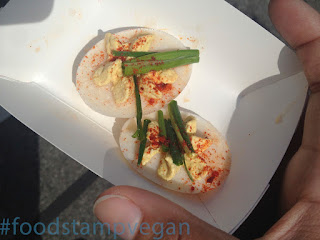 The portions of the foods were SO MUCH better than last year as well. I get it, these are often sample sizes, but this year, the samples were much larger and priced very well compared to the variety of things offered. Good job! 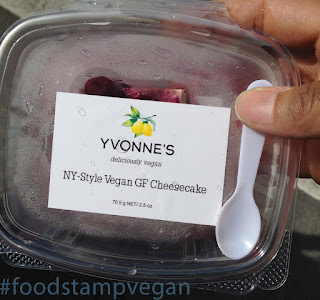 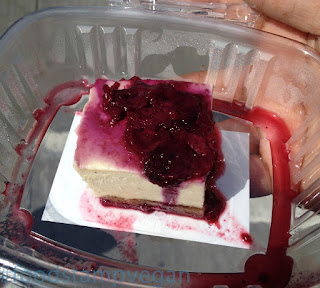 By about 1:00 the crowds began to really swell. The ticket lines were still hundreds of people plus, and my friend and I were running low on tickets. By luck we ran into a friend of my friend who bought us tickets with their VIP pass. The VIP pass gave customers a special shorter window in which to order food and buy tickets, plus a block of tickets and other small goodies for about $40. I thought that was a decent deal. I found out about the VIP pass rather late and they offered advance sales of it online. They were sold out when I went to order, but looking at how few people I saw with VIP arm bands, it makes me wonder how many people actually got them.

Once we got more tickets, my friend and I made a plan to find the shortest lines, because it was nearing 3PM, vendors were starting to run out, and the food lines were getting crazy long. Keep in mind that the TICKET lines were still super long. Food lines always get long near the later part of festivals, especially if the food is popular, so I can't blame the event too much for that. 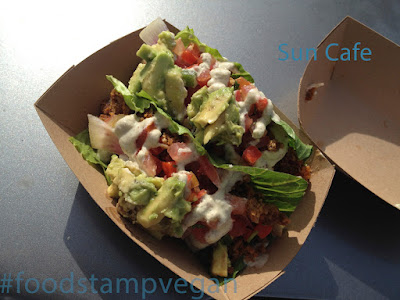 Lettuce tacos. The last purchase of the event. I brought these home. They were $2 each.

Nearing our end of the event my friend and I had about $8 in tickets but were having a hard time to find a line short enough and not jumbled enough to spend them in. There were thousands of people now, and lines for everything were getting huge and folding into other lines. I'd say it was poor management on the event's end for not marking the lines clear enough for the amount of traffic it had. We finally found a place to spend them and after 30 minutes left and had a beer where we had a rather annoying and condescending conversation with a manager at the nearby Big Wangs bar. He thought he was being personable, but he was like every other tired meat eater making jabs at us for no reason, calling it "teasing" and expecting us to justify our lifestyle. What a crappy end to a pretty okay day.

In total I spent about $50 on food and left pretty full with all the variety I had. That included me being able to bring home those tacos and two orders of cupcake kabobs. Total I spent the whole day was around $80 with a piece of merch and beers after the event. 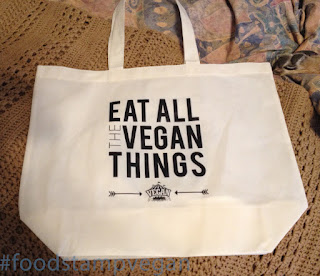 $6 for a bag that probably cost 20¢ to make. And I indeed asked if I could use my tickets, of course I couldn't, and I knew that.

My recap of the Fair is this:
The event was fun. Great people, music, variety of foods, plenty of tables and bathrooms for all and a good vibe. SO SO much better than last year.

The crux and the main thorn in this event, and the reason why I may not go again next year is their ticket system. It's infuriating. They do a day-of ticket selling CASH only. Cash only events always throw me off, especially when there is not admission fee. I feel they do that because cash is harder to trace. They did advance selling of the VIP tickets online, so it's not like they can't sell online, they just choose not to. People who had just arrived left quickly after because of the ticket lines. People who wanted to buy more tickets to buy more food did not because of the ticket lines. If you did get tickets you then had to wait in line again for food! It's just a terrible system.

They did do "advanced ticket sales" at one cafe at around 3:30 the day prior. What a joke. I understand that an event like this takes a huge amount of planning, but the ticket system does not help the event, only the planners.

On their Facebook page, they removed most of the negative comments. Mostly ALL were about the ticket system. The event was over at 7pm, and after our beers I looked back around 6 and there were still people in the ticket line! 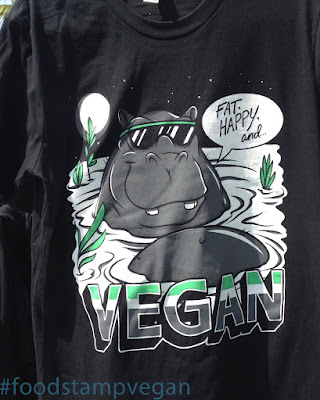 In conclusion, the event was fun, but not that special considering how many vegan events go on in the LA area. There is the Vegan Festival in Long Beach, the VegFest, and the VERY well run Vegan Beer Fest, not to mention others. None of them use this ticket system and a lot of them have the same vendors. They are shooting themselves in the foot. People are going to start saying, "Yeah it was fun but the ticket thing was a pain, just go to this other festival." I can totally see that happening.
Posted by Food Stamp Vegan at 5:38 PM