Hi everyone!
I'm back with my final thoughts on the remaining flavors of Ben & Jerry's new Frozen Dessert  flavors.

In my previous post, I did a review of their chocolate fudge flavor. This review will be a run down of their other three flavors.


Let's start with the flavor that I liked the most. 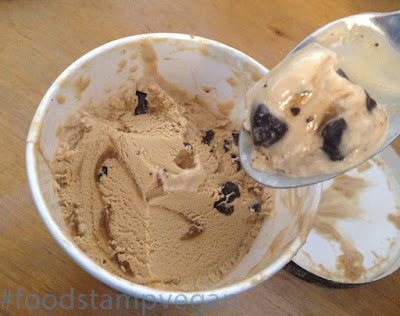 Not ice cream, but "frozen dessert" because you can't call it ice cream without milk. It's like the whole thing Hampton Creek went through with Just Mayo. But I digress.

I have never really had Ben and Jerry's before....like ever. Even before I gave up dairy, I really was never a fan of too much stuff in my ice cream. I was a purist, and like my vanilla clean and sweet and my chocolate rich and heavy.

This was years ago, and I've opened myself up to the many types of yummies out there in all flavors from folded ice cream where you add your own goodies and its mashed in for you right there, to  whatever else adds not only flavor, but also some sweetness. 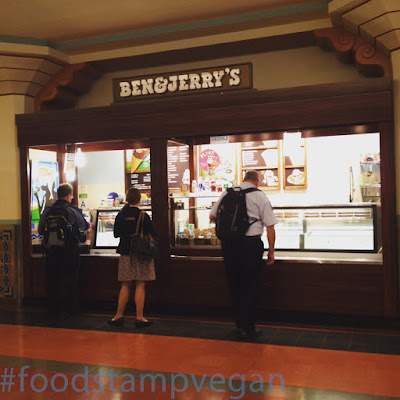 When I was at Union Station in Los Angeles, commuting for work, I was pleased to find out that they has all four flavors in stock!

I went on and picked up all four, though I really only wanted three, but I figured I'd get all four and write reviews on them anyway.

This review is only for The Chocolate Fudge Brownie, as I just cant eat that much ice cream, er frozen dessert in one sitting, so Ill space them out as time goes on.

The four new vegan flavors are Chocolate Fudge Brownie, Coffee Caramel Fudge, Chunky Monkey (kudos for them for making a vegan version of one of their most popular non vegan flavors) and P.B. & Cookies. 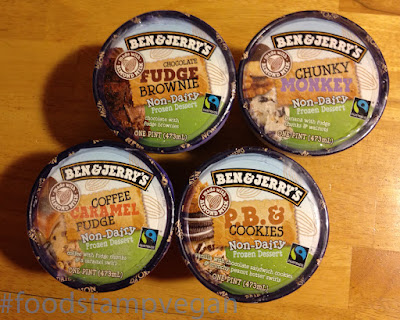 I opened the fudge brownie and it was pretty smooth. I let it sit for about 10 minutes until it was scoopable. 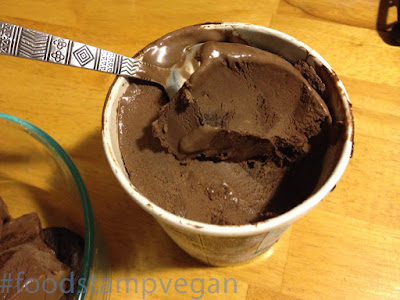 After some time, I found that when it was soft, it scooped nicely, like we are used to seeing in those photo ads. So, sexy. I had a spoon, and though look is nice, taste was key.

I should take the time to say, I really haven't found much chocolate ice cream that I've been impressed with. I honestly don't think chocolate lends itself well to ice cream/frozen desserts unless it's got additional chocolate melted over it, or fudge chocolate melted in it.  Frozen tends to make the chocolate taste grainy.

The base of this is almond milk, and you taste it. First. It's a different taste than say soy or coconut, which are just creamier. First you taste almond, for a moment, then the fat immediately after, then you taste at the finish the chocolate. I felt the whole ice cream was missing a middle note so it felt hollow. I nice vanilla would have been good to carry the middle and the end, but as it is now its kind of bland.

The texture of the ice cream itself is grainy. I think its both the use of almond milk and the chocolate. There is not much "creaminess" to it. That was disappointing. The brownie was these little generic chunks added in. They didn't add too much to the experience.

Some good parts are it's not overpoweringly sweet, which I appreciate. The fat makes the ice cream really rich, so the pint can last. I DO taste chocolate, but, as always, I wish I tasted more.

Eating this by itself will probably disappoint. Eating it ala mode on a warm chocolate fudge brownie would be enjoyable. 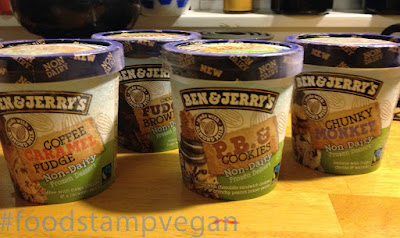 This flavor I wouldn't buy again. I really think they need to rework this formula. Hey, never said my reviews were gonna be nice.

Posted by Food Stamp Vegan at 11:08 AM No comments: