Squash: Now I know what the fuss is about.

It's funny, a year ago I was in this boat. No real money, thinking about every penny, measuring my money more so than my time as an asset that was more valuable to me. I hated it. I really did, still do, but it was amazing how quickly those mind triggers came back to me when I lost my job.

Right now I'm okay as I look for other work, but I watch every penny. Recently had a no spend episode for 48 hours, then bought some soy milk and a couple other things. That brings me to this: 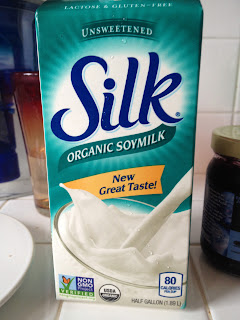 Don't buy Silk soy milk. Yeah, they got bought by Kellogg some time ago, and made the slimy move of taking all their brands off organic soy and making it one 'premium' line (douche move, Silk), which I bought because it had no added sugar and none of their non organic lines came unsweetened. I paid the extra money because I didn't want the extra sugar in my coffee (the main reason I get soy milk besides baking).

Well, they 'changed their formula' and it sucks. Obscenely grainy, leaves sediment at the bottom of my coffee cup, and it's 'thicker' if that makes since, meaning it's trying to mimic real milk more so in texture so real milk drinkers will like it? Fail.

Look, I know that we vegans are not going the be the main market of this type of stuff, especially now that so many meat eaters are looking for ways to cut their cholesterol and high blood pressures, but making something that isn't something taste like something else when it tasted alight to begin with? Such a bad move, and my last time purchasing their overpriced soy milk.


Okay, rant over. Let's get to squash. 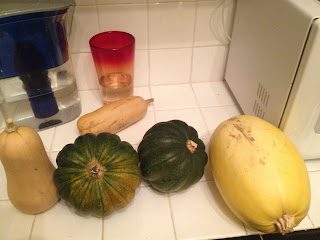 To tell you all the truth, I never gave squash much thought. I just saw them as this decorative gourd that sat on tables at Thanksgiving. Then a co-worker at my last job came in with a container of pasta sauce and spaghetti squash for lunch. It looked good enough, though I didn't have any. That image never left my mind. It wasn't yuckie or anything, just unfamiliar.

So I decided to collect all the squash that my CSA had given me over the past few weeks and do something with it.

First off, I didn't know squash was so...dense. Geeze It took me nearly 45 minutes to cut up al the squash. I know some people (from looking online because I didn't know a thing about squash) prefer to roast it in it's skin, but I was mixing a lot of squash together, and wanted them cut in cubes. 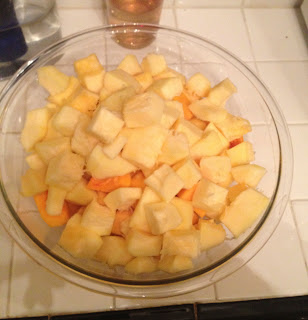 After I did that, I decided to use up some of those beets that I get in abundance in my CSA as well. I do like beets, a lot, but other than juicing I rarely take the time to cook them. I chopped them up, along with an onion, tossed it all in olive oil salt and pepper and cooked them on 360 for over an hour. 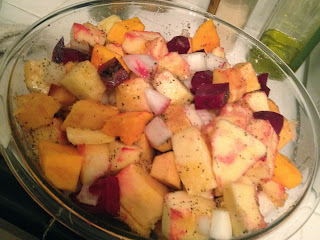 Oh. My. Goodness! Now I get it! Now I understand! I added a bit of 'butter' and it was the most rich extravagant food I'd had in quite some time! Delicious! That settles it. I'm going to get squad from now on. I do like the texture of spaghetti squash a bit more than the green skinned squad (not a squash expert), so I might just indulge in that for a while. Still, it's made me realize I need to branch out more, be adventurous (budget allowing) and see what I can get on the cheap. You should try it too.
Posted by Food Stamp Vegan at 12:24 AM