I have a throat congestion I've had for going on 4 months and I was finally able to get a clinic visit where the doctor told me it was allergies. Which ones, she didn't say, but she put me on an antihistamine, which didn't work. Now I'm on Flonase and it's not doing anything either. I feel bad, because the slip that came with my free meds said this Flonase cost $100. I'm taking away a medicine someone could really use just because my 'doctor' is lazy. But I digress.

My reason for trying gluten free isn't because of said mythical allergy. I've wanted to do it for a while and I'm one month in.

Oh. My. Goodness. People with wheat allergies, I so, so feel for you! It's so hard to find food that has no wheat contamination! I didn't realize how wheat dependent we are her in this country. No wonder people develop allergies to it! Our bodies are on overload.

So  this month I finished off some pasta I made in soup form before I decided to go gluten free. I actually put all the stuff that is wheat/wheat contained food in the freezer. It take up half the freezer. Insane. Granted, there are two bags of flour in there, but still, that's a lot of wheat!


Okay, no wheat for two months. Now comes the challenge of finding what I can eat. I did some research and decided if I was going to attempt this, I was going to do it right. I packed away my oatmeal, which I LOVE, and got some GF oats. I love Bob's Red MIll, so I also bought some of their all purpose flour as well. Not too much, but it says you can 'use it' like normal flour, so we will see. I have yet to bake with it. I had to get some Xantham Gum. That was $12 so I better find a lot of uses for it. 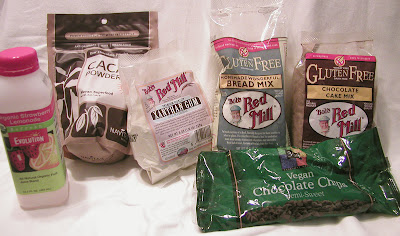 But I wanted to try some stuff before the special stuff got to me. I'm not the kind of person who uses a lot of substitutes, so I looked online for some good recipes that I could make up with stuff I already had.
I found a chickpea chocolate cake! Wow! I tried it and it was a HUGE FAIL. 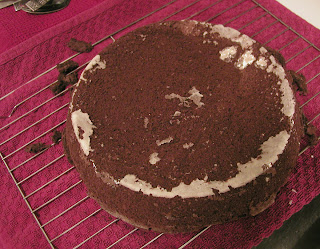 The outside looks nice, but it never got solid, so the inside was runny. Into the trash it went. In hind sigh, I think it was me who added too much moisture to the cake. The chickpeas were supposed to already be cooked, and that in and of itself adds tons of moisture. What I did was add two tablespoons of soy yogurt to the mix, a boni-fied moisture maker.
I wanted to know what my options were for bread, so I got a loaf of the GF stuff. 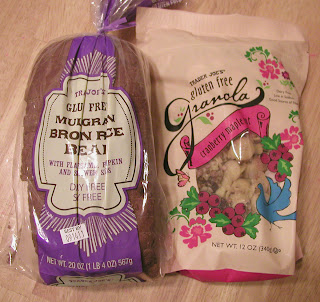 I have to say, I really, really like the bread. With the salads I've been eating, it works out great as a hard chewy add in. 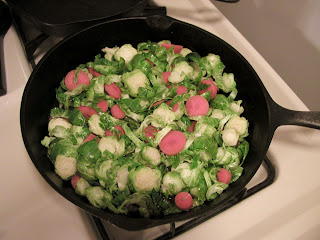 Here I'm sautéing brussle sprouts and carrots with water and a bit of cocoanut oil. Use the oil sparingly. It makes a very buttery taste, and I've never been a big butter cooker.
We will see where this ends up, but so far, I haven't baked. I'm afraid of another cake fail. No one like a cake fail.
Posted by Food Stamp Vegan at 5:14 AM