How I do salads.

I've been trying to think of my reason for this blog. Mainly I believe it is to catalog what I eat as a vegan on government assistance. It's a hard road, especially when you are trying to eat healthy. My income rarely allots extra for food, and sometimes I need to find extra money to make food happen. I'm not soup kitchen poor, but I'm not go out and have a sit down dinner weekly rich, either.

I think by now readers know what I buy. I realized that I don't vary that much from month to month. I pick up staples and I often eat in ruts. So I'm going to focus on what I make/bake/cook instead. Sure, I'm still on a food assistance budget, but I've learned to make up some great shit! 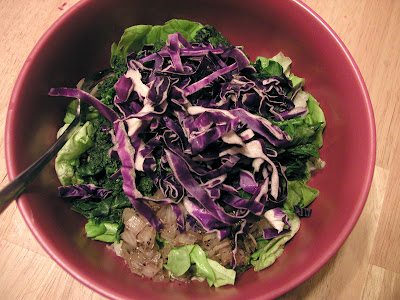 I've been sautéing a lot lately. Making some greens that will last two to three days. A whole bag of spinach, with some onion, and some other things. I'm not a cold salad eater. I've always hated cool produce. I does not grow out of the ground cold, why are we forced to eat salads cold. I don't buy into that at all.

My salad making has become somewhat of a puzzle. I don't like dressing much, either. Come on, that doesn't limit me in the least. It just makes me construct more of a full bodied meal when I'm cooking. 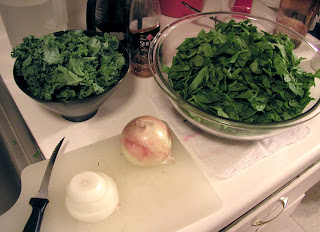 See my ingredients.
I start off with 1/3 an onion, sautéed with sea salt, black pepper and some rosemary. I do love me some rosemary. Once the onions are just starting to glaze, I de-glaze the pan with some cooking sherry. It adds great flavor. 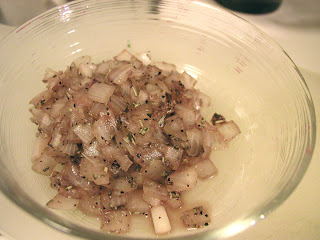 Next is the kale. Kale is becoming a big yummer in my diet. I nibble on it raw while I am tearing the leaves from the stalk. It's got a bitter taste that I love. Whenever I am eating kale, I think on who turned me onto it. I very thin woman at a party who was vegetarian too. I think she may have had an eating disorder, but she was super nice and said that she ate the kale as a snack often. I thought what the hell. All I can say is thanks miss and yay kale.
I've started to add some water to the pan, and a dollop of vegetable bouillon. 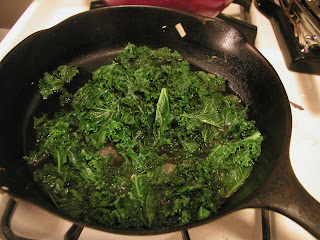 From there I lightly cook the spinach enough to start to wilt the leaves. I just could not bear to turn out the leftover skillet juice. I think Ill add it to some potatoes I plan on making in the next few days. 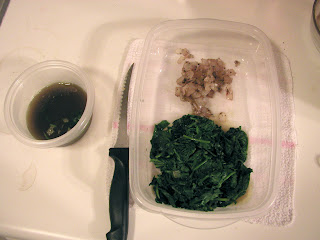 I place the cooked greens on a bed of butter lettuce and add red cabbage as garnish. Now that's a salad I can get behind.
Posted by Food Stamp Vegan at 5:15 AM